Let us start with this statement.

Dude….wow Kevin really traded down 🤣🤣🤣🤣🤣🤣 oh and wait…is that a naked woman on his shirt? hypocrite!

Britney Army let's do our thing and point out kfed and all his times he's done the above or uncalled things towards others and females that Britney has never spoken back about.

Britney and Sam responded to Kfeds new $$ based interview

Britney Spears and her husband Sam Asghari have angrily hit back at a series of bombshell claims her ex Kevin Federline has made in a tell-all interview.

The singer shares two sons, 16-year-old Sean Preston and 15-year-old Jayden James, with her ex-husband Federline, who live with their father, his wife and his four other children.

In an paid for interview which ITV News is set to air parts of next week, Federline has claimed that Spears' teenage sons choose not to see her and are embarrassed by her nude photos on Instagram.

But Spears, 40, shared in a statement on Instagram Stories: “It saddens me to hear that my ex husband has decided to discuss the relationship between me and my children.

“As we all know, raising teenage boys is never easy for anyone. It concerns me the fact that the reasons is based on my Instagram… it was LONG before Instagram.

“I gave them everything… Only one word: HURTFUL… I’ll say it… My mother told me ‘You should GIVE them to their dad’.

“I’m sharing this because I can… Have a good day folks!”

Comments by Federline, 44, in the soon-to-air interview included claiming that he had told their sons about Spears' nude selfies: “I try to explain to them, ‘Look, maybe that’s just another way she tries to express herself’.

"But that doesn’t take away from the fact of what it does to them. It’s tough. I can't imagine how it feels to be a teenager having to go to high school.”

He also added: "The boys have decided they are not seeing her right now… It's been a few months since they've seen her."

Talking about her recent wedding to 28-year-old actor Asghari, he said: "They were happy for her but as they’re not seeing her right now, they made the decision not to go to her wedding.”

Federline also claimed the controversial 13-year conservatorship put in place by her father Jamie Spears, which came to an end in November 2021, had "saved her life".

But Asghari also hit back on Instagram Stories, writing: "To clarify my wife has never posted a nude selfie except of her butt which is quite modest these days."

He added that as Sean Preston and Jayden James got older they "may eventually realise the 'tough' part was having a father who hasn't worked much in over 15 years as a role model."

Spears and Federline were married from 2004 to 2007 and Asghari criticised the former backing dancer for appearing to support the conservatorship and Jamie Spears, claiming he had been "benefitting from it somehow".

He wrote: “Kevin’s gravy train will end soon which probably explains the timing of these hurtful statements. I do not know him personally and have nothing against him aside him trying to vilify my wife.”

Asghari then made a dig about having a job himself, before ending: "I wish him the best and hope he has a more positive outlook in the future for benefit of all involved."

Appearing to reference Will Smith's Oscars comments where he slapped Chris Rock, Asghari finished: "But for now: Keep my wife's name...out your mouth." 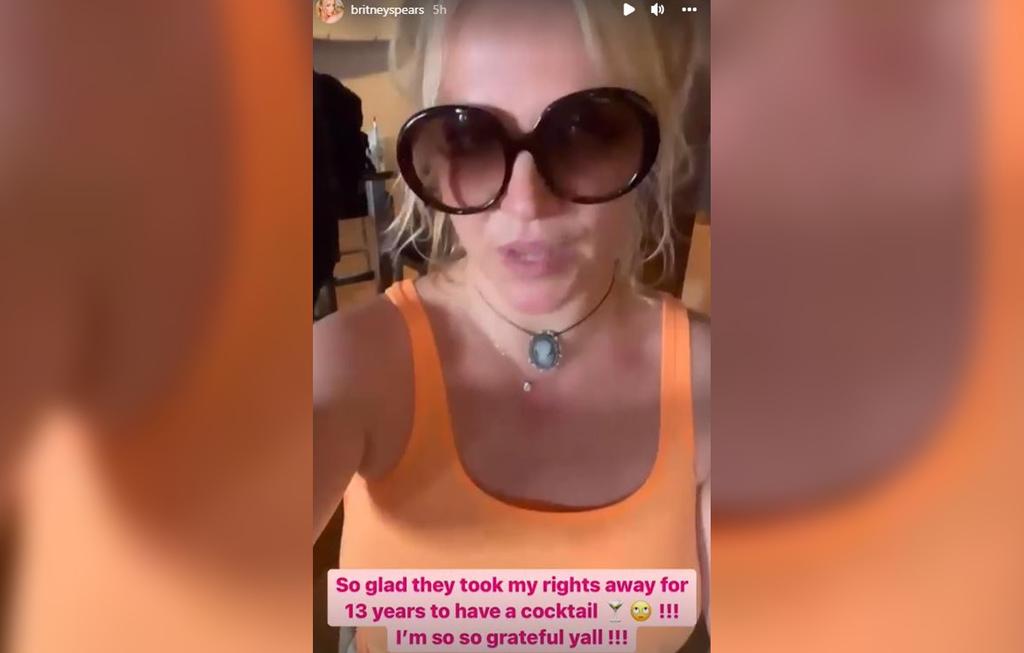 Brit revealed to us fans this week that she went to a bar for the "first time" in 13 years.

Brit shared a new milestone on her Instagram stories and showed her followers her enjoying a cocktail in a bar with her assistant.

"This is my first time at a bar. First time," Spears said to the camera, wearing a large pair of sunglasses. "I feel so fancy and I feel so sophisticated."

Brit then turned the camera on her assistant, Victoria Asher, who said: "We're having a little beverage." Britney also showed a cocktail being served at the bar, and a shot of a plate of intricately-plated food.

"So glad they took my rights away for 13 years to have a cocktail. I'm so grateful y'all."

Britney Spears has revealed her true feelings about seeing documentaries being made about her life, saying she’s “humiliated” by the shows.

In a since-deleted Instagram post, the singer went on a lengthy tirade about the number of TV specials focusing on her conservatorship battle.

“I feel like America has done a wonderful job at humiliating me,” she told fans.

“I’ve never felt more bullied in my life in this country it’s insane ... and come on seriously is it honestly legal to do that many documentaries about someone without their blessing at all??”

She said the producers of such documentaries claimed they were “helping” her by making private details of her life public.

“It was the most insulting thing I ever saw in my life and every person I have spoken to has said it’s why the conservatorship ended.”

However, Britney also said it was her effort that ended the 13-year conservatorship in November last year and she was offended by other people taking the credit.

“Making up for some of my past, they literally have no remorse at all,” she wrote.

“They have always treated my like that, literally that’s exactly what my family did to me. They threw me away and treated me like nothing.”

Spears also claimed no other star has been subject to the hounding by the public and media as she has.