Get ‘In the Zone’: Inside the Britney Spears Pop-Up Experience in LA

A former Kmart in Los Angeles has been transformed into a pop-up worthy of a pop princess. “The Zone” is an immersive pop-up experience and retail shop that celebrates Britney Spears’ iconic songs, videos, and outfits through Instagram-worthy photo ops, interactive displays and personalized content activated by special RFID wristbands.

Dubbed the “ultimate Britney Spears fan experience,” the 30,000 square foot pop-up opens this weekend, across from The Grove shopping center in L.A. Tickets start at $59.50, though the price goes up to $64.50 if you want to go during “peak hours” (see ticket info here).

“Two years ago, we thought, ‘What if we could create a new experience where you could literally walk into the world and music videos of your favorite artist?’ And we immediately thought of Britney,” explains Jeff Delson, the event producer for “The Zone.” “We are huge fans – she is an icon of our generation and her music videos are etched in our collective imagination. With Britney’s blessing, we knew we had to deliver a totally groundbreaking experience.”

Delson admits he didn’t have a chance to speak with Spears directly, though he stresses that, “She’s absolutely aware of this [and] super excited.”

Aside from the installations, the front of the building will house an exclusive Britney Spears merchandise shop, with limited-edition pieces created especially for the event, as well as old favorites from previous tours. Here’s what else to expect… 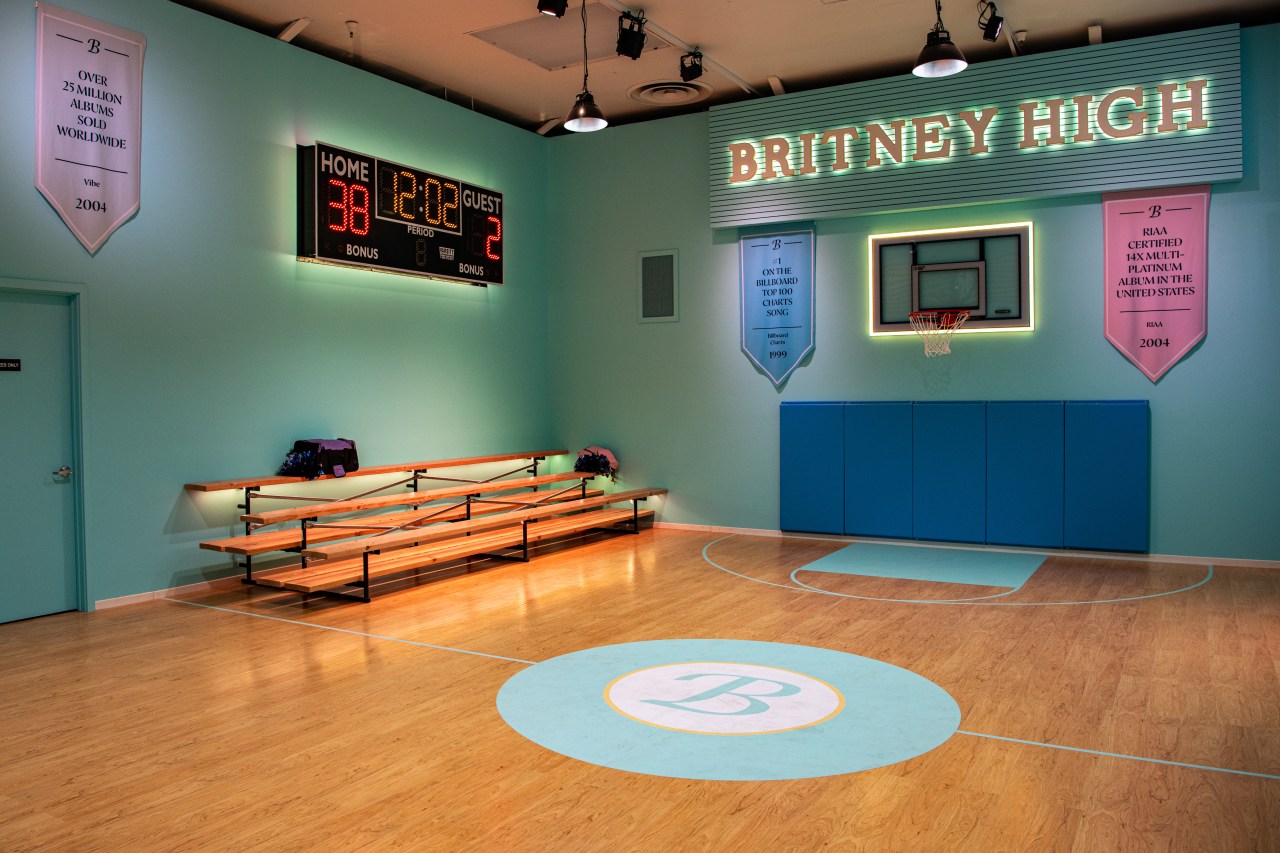 Swish Me Baby One More Time

Spears grew up playing basketball in school, which is what reportedly inspired the gym scene in the “…Baby One More Time” video. Fans can pose for a pic on the bleachers, or dribble a ball to take their best three-point-shot. 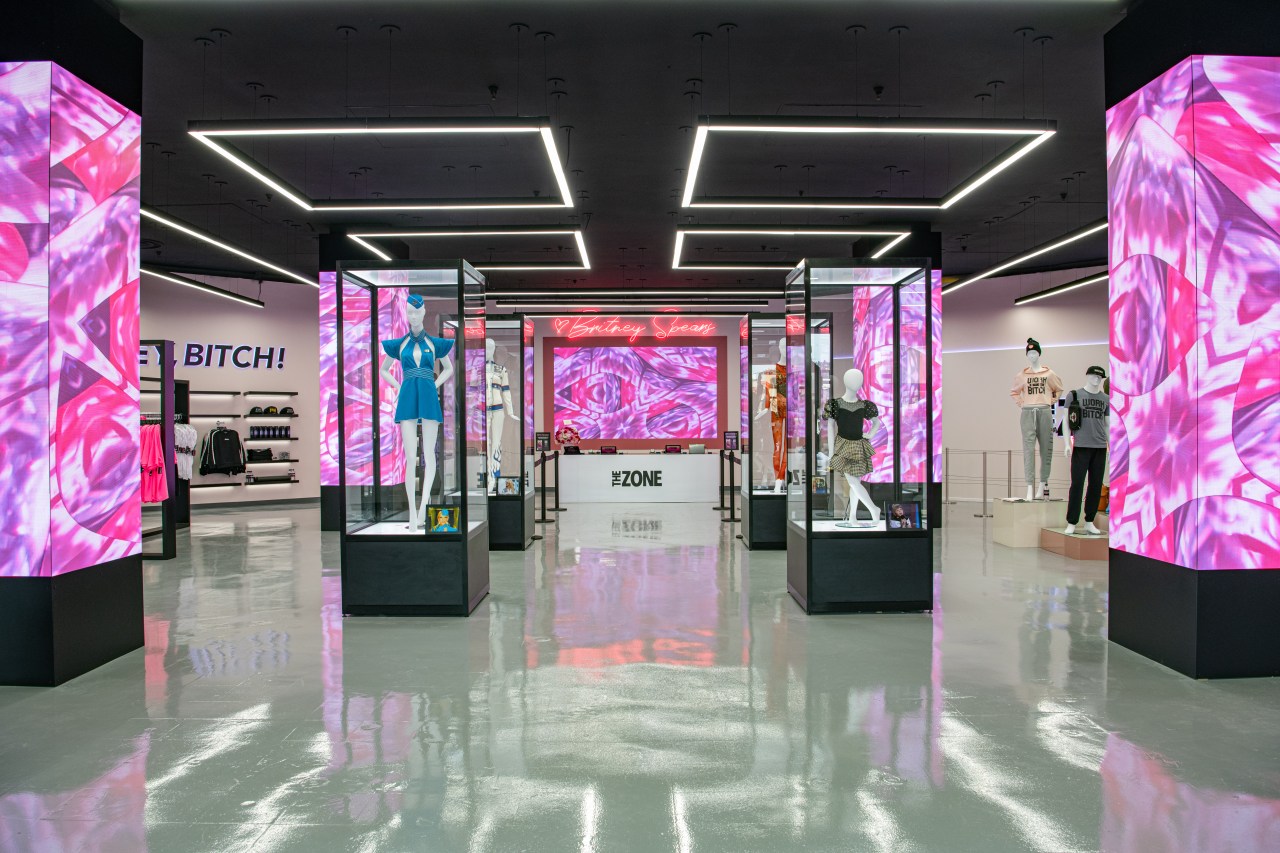 Mannequins once displayed T-shirts and denim inside this space, a former Kmart department store, but the entrance to the Britney pop-up now features mannequins dressed in some of Spears’ most iconic outfits from memorable live performances and music videos. 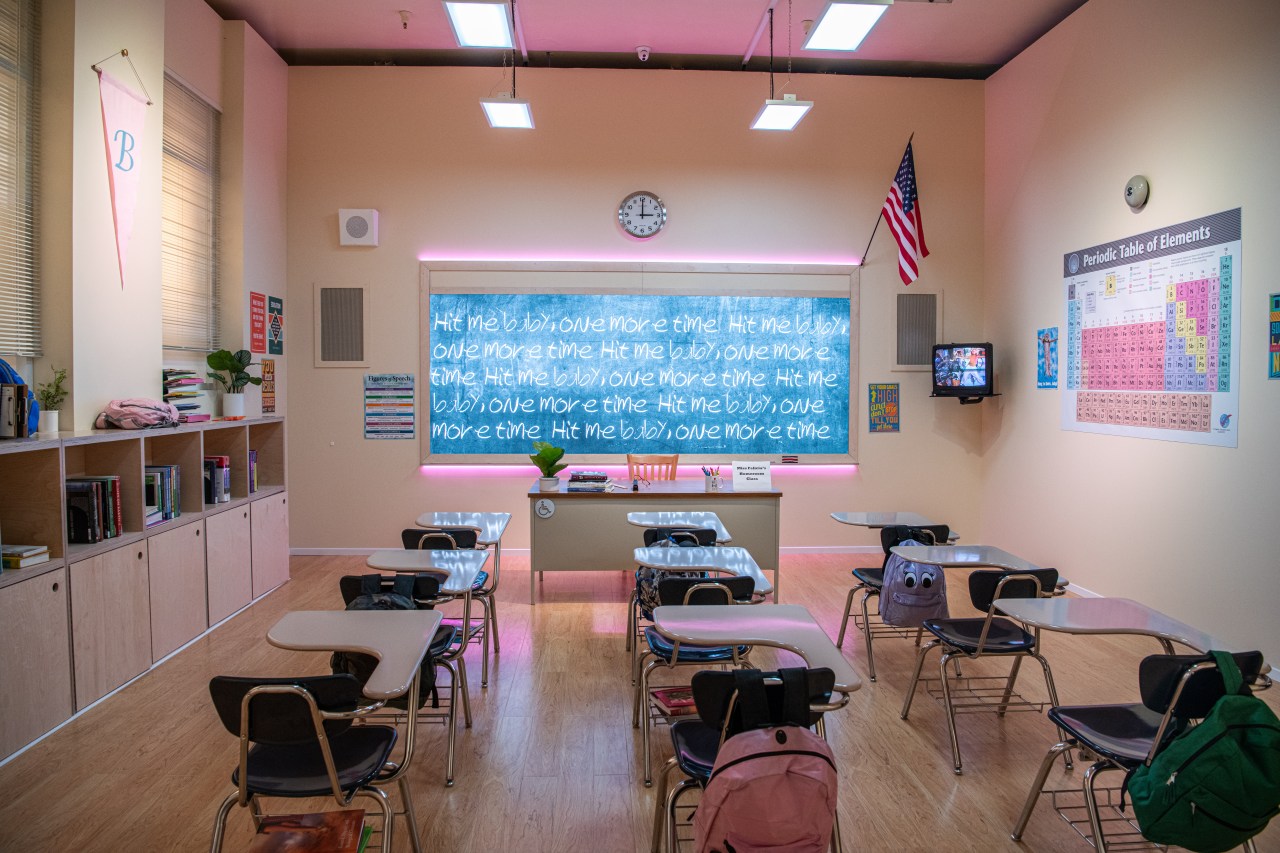 Class is in Session

Visitors are first taken to this classroom setup, inspired by the classroom in Spears’ “…Baby One More Time” video. Make sure you stay to view a surprise video message from one of Spears’ longtime friends and confidantes. 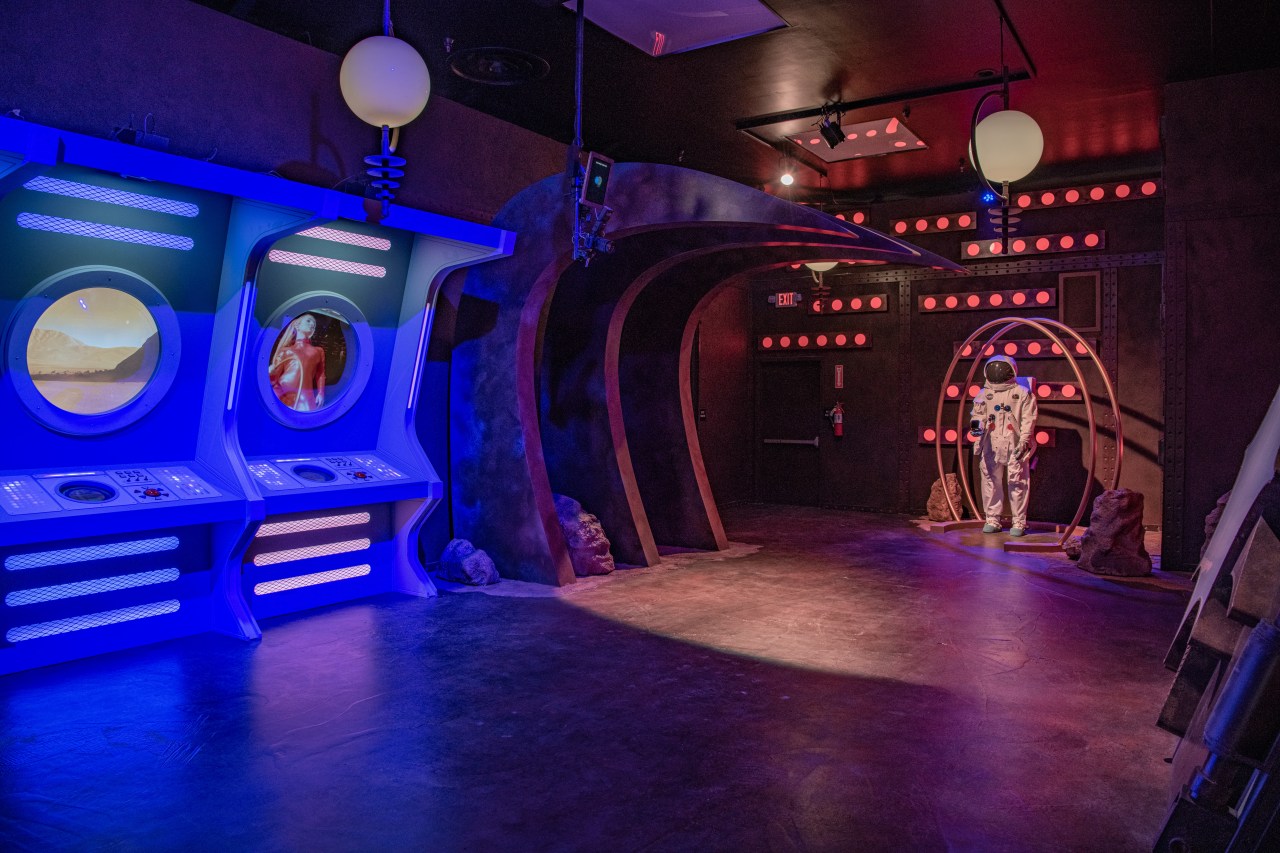 Yes, yes it is: a re-creation of the set from Spears’ “Oops I Did It Again” video, complete with Mars-inspired lighting, an interactive mission control station and an astronaut reciting the infamous “dialogue bridge” from the song. And yes, that Titanic necklace (or at least a very believable imitation version of it) is part of this room too. 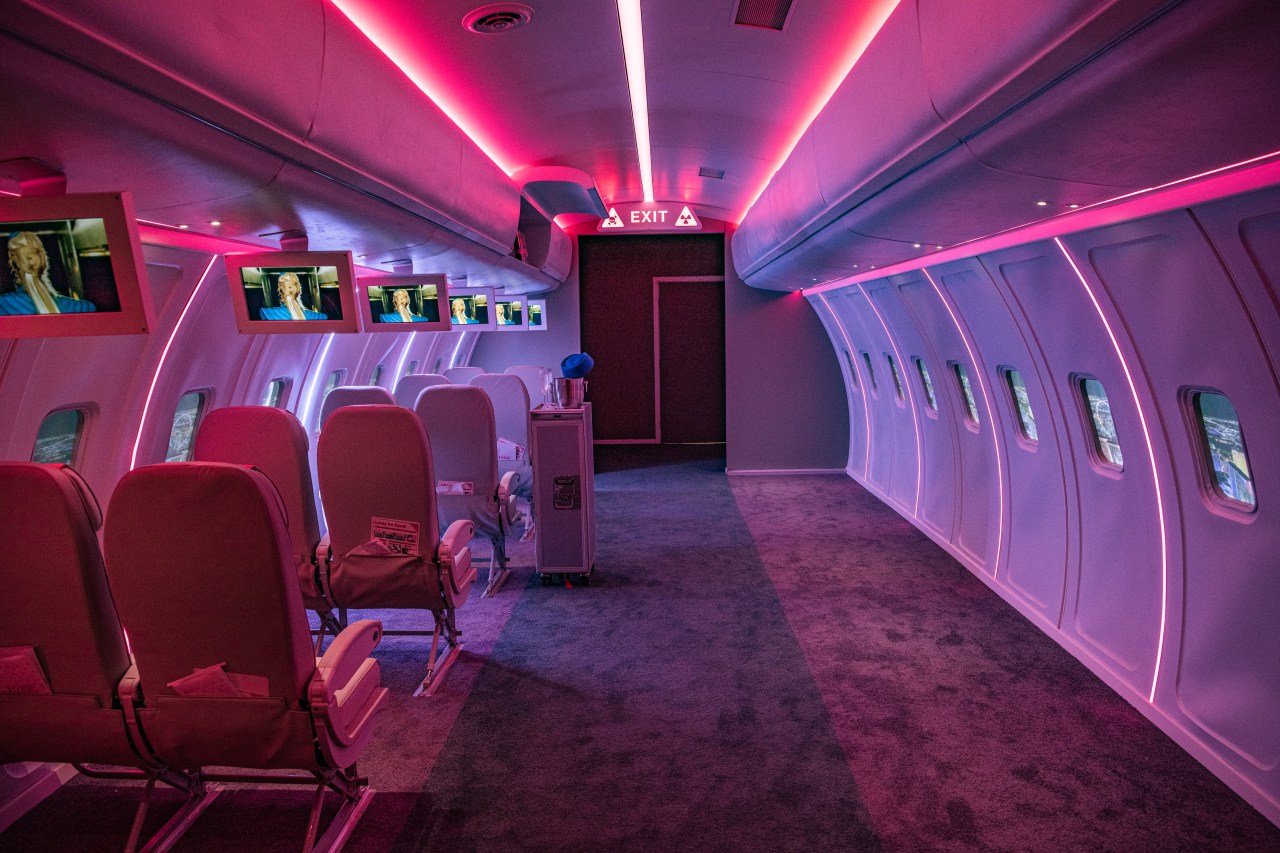 Fans and critics count “Toxic” among one of Spears’ most memorable songs. Take a seat (window or aisle?) and watch the music video playing on the drop-down screens, or throw on a flight attendant hat and take a pic behind the serving trolley à la Spears in the video. A nice touch: the “sick bags” in your seat back pocket are all labeled “Toxic” – how appropriate. 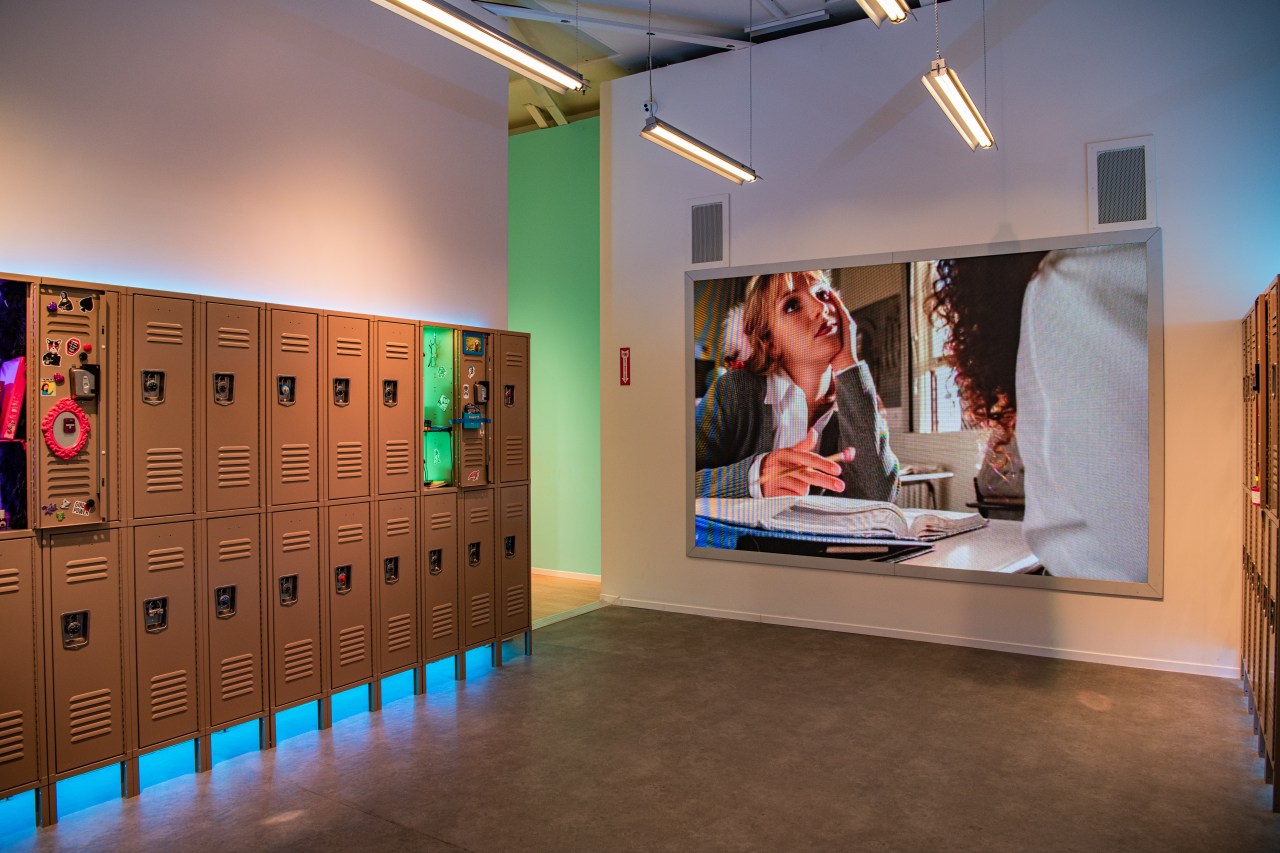 Fans can take a nostalgic walk through the late 90s and early 2000s in this locker-lined hallway. The lockers open up to reveal time capsule-worthy items — think TRL-era Britney posters, stickers and merch. 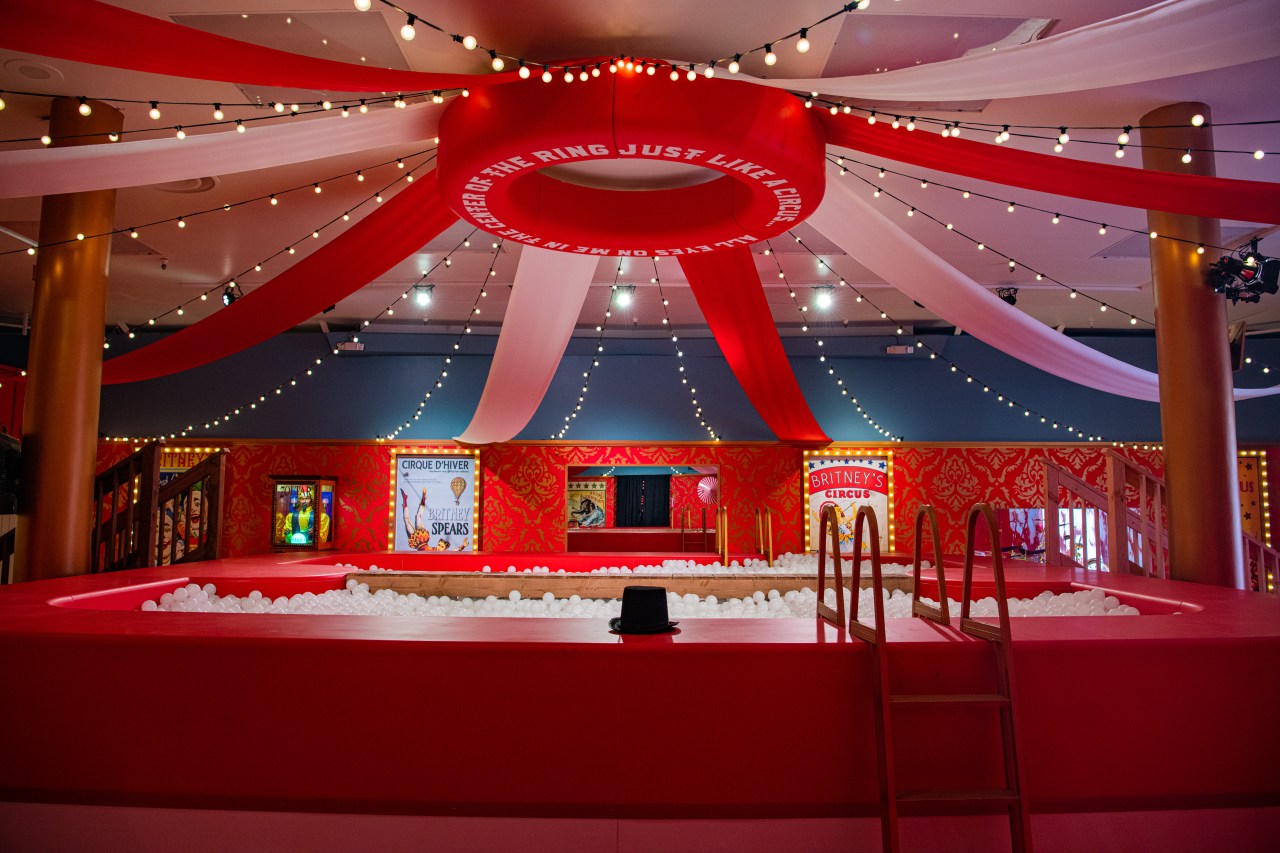 Circus was the sixth studio album released by Spears, spawning the hits, “Womanizer,” and the title track. There’s a lot to do and take in in this room, from a ball pit (perfect for that boomerang), to interactive photo ops that visitors can activate through a personalized RFID bracelet. 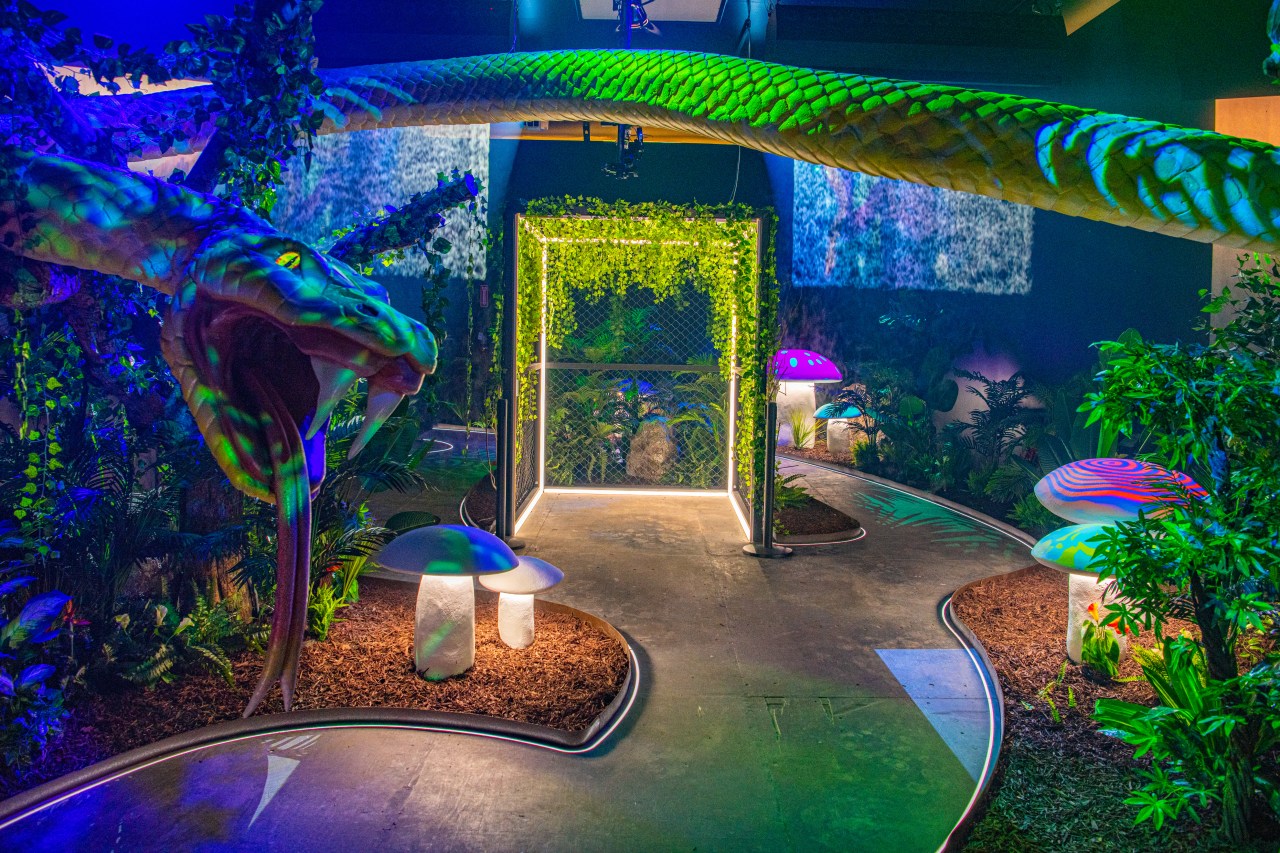 While most of the installations in the ten-room space draw inspiration from Spears’ most famous music videos, this space pays tribute to the performer’s memorable 2001 VMAs performance of “I’m a Slave 4 U.” What to expect: a vaguely jungle-themed walkway with fake rain and yes, that snake. 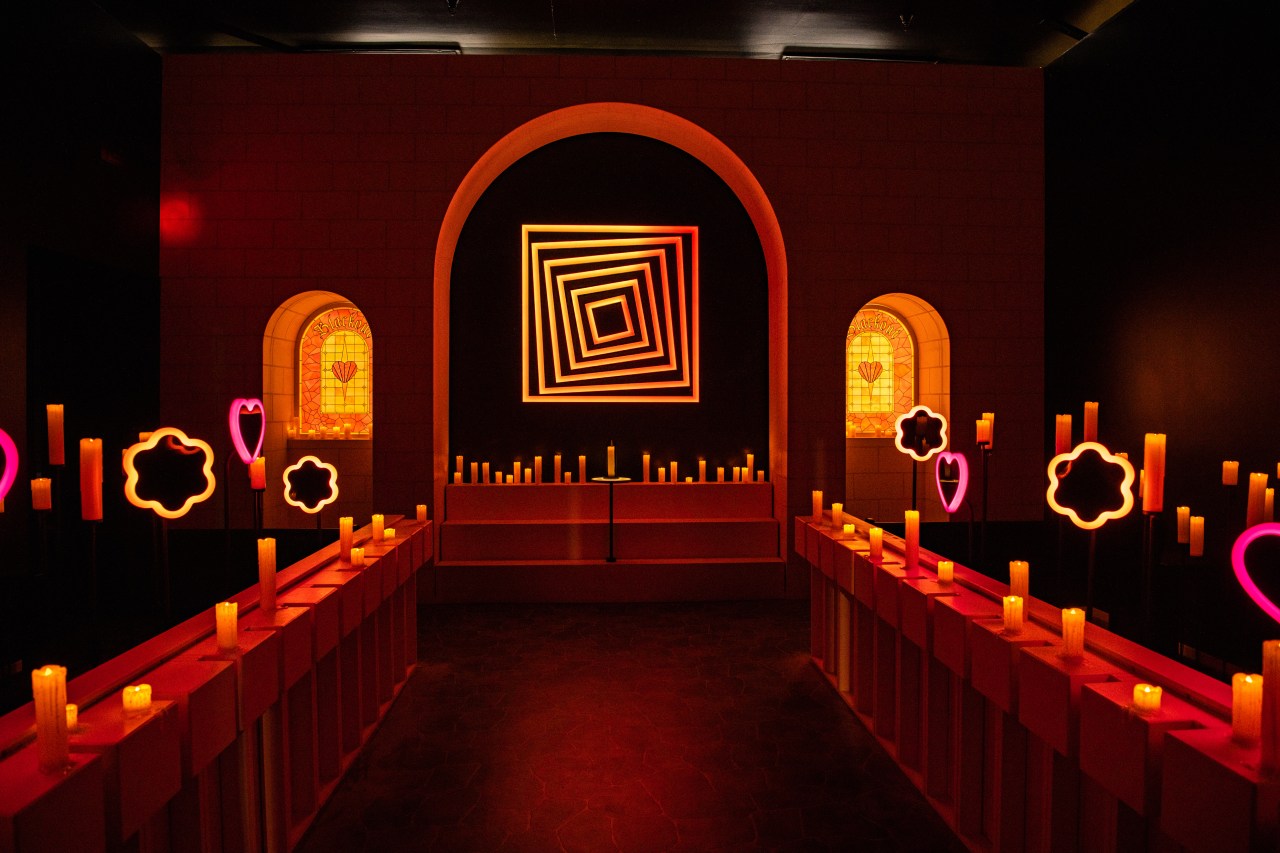 Blackout may have dropped during a particularly tumultuous time in Spears’ life, but it remains one of her most beloved and critically-acclaimed albums.

The Blackout era was also when fans began using the nickname “Godney” to descibe their former teen angel. It’s fitting then, that this tribute to Blackout is set inside a chapel. Organizers of “The Zone” say they’ve already had requests from couples wanting to get married in the space. 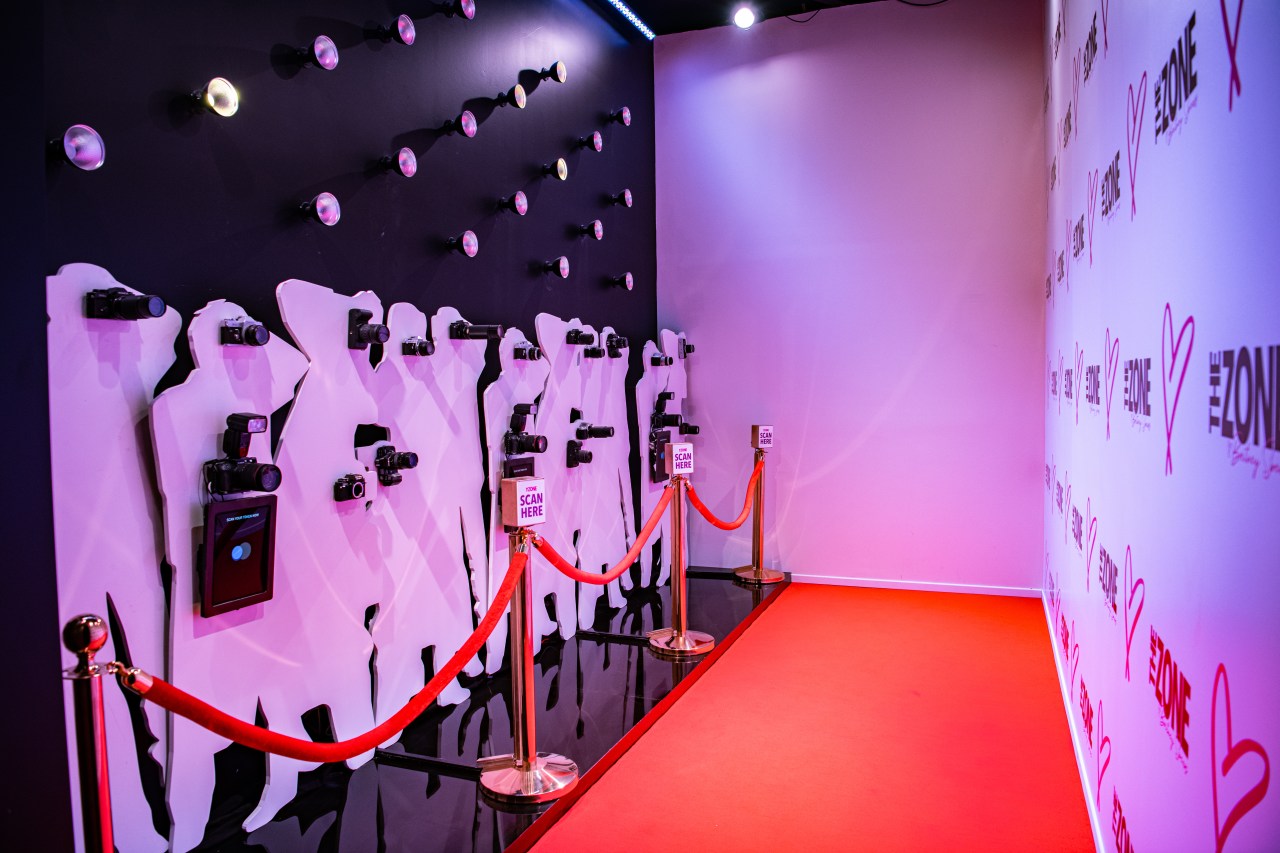 Extra, Extra, This Just In

Blackout spawned three singles, including “Piece of Me.” The song documents Spears’ tenuous relationship with the media, particularly the paparazzi. It’s a little strange then, that this part of the pop-up lets you actually pose for a paparazzi shot… which is then digitally-imposed onto a fake tabloid cover — the same things Britney was calling out in her song. 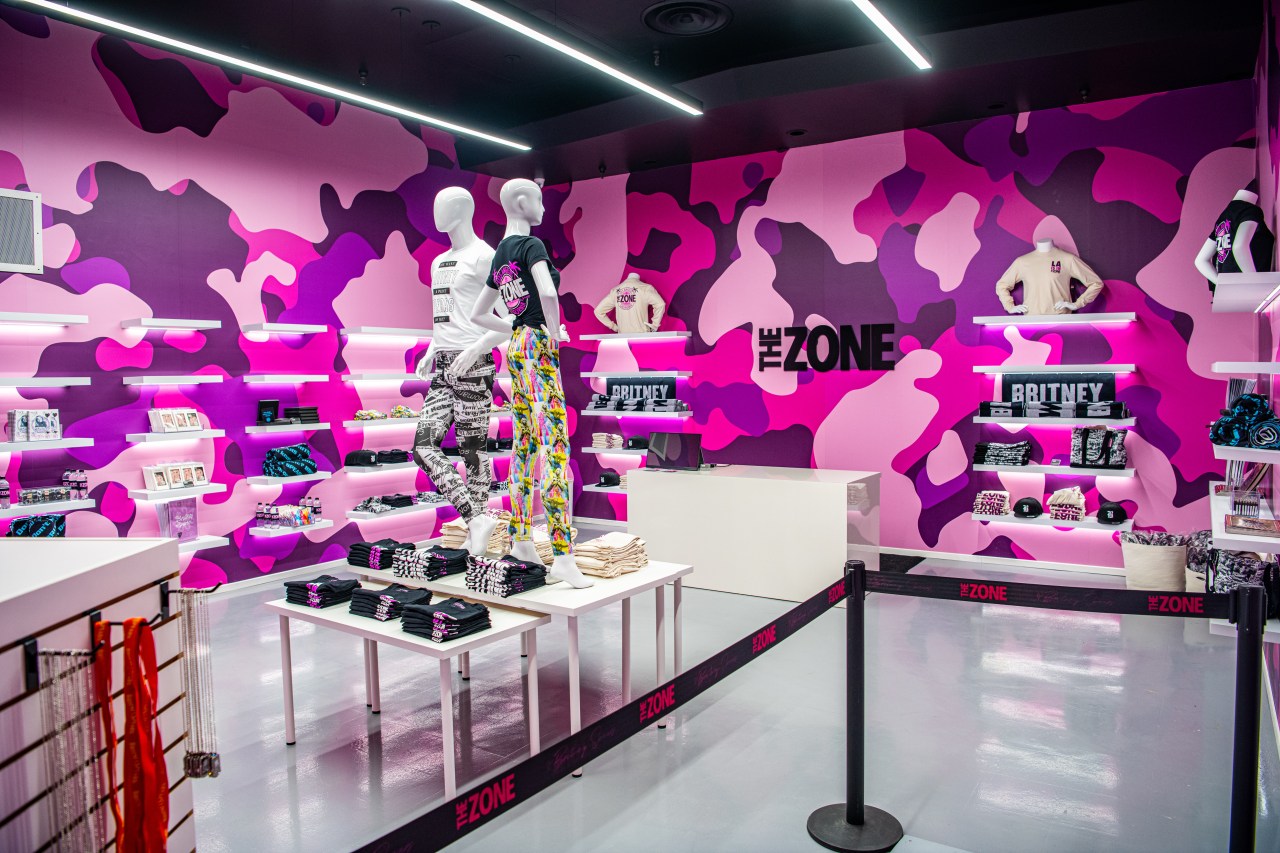 ‘Till The Merch Ends

You’ll need a ticket to get into the exhibits inside “The Zone,” but fans can also swing by the gift shop sans tix to shop exclusive Britney merch and collectibles. Set-up like the juniors section of a Forever 21 store, the gift shop includes everything from Britney bracelets to leggings, towels and housewares. Surprisingly absent from the store? Actual music, as in actual Britney albums for sale. Guess you’ll still have to go online for that.