We Are Still Obsessed With Britney Spears

At a Los Angeles pop-up called the Zone you can live out all your childhood fantasies. 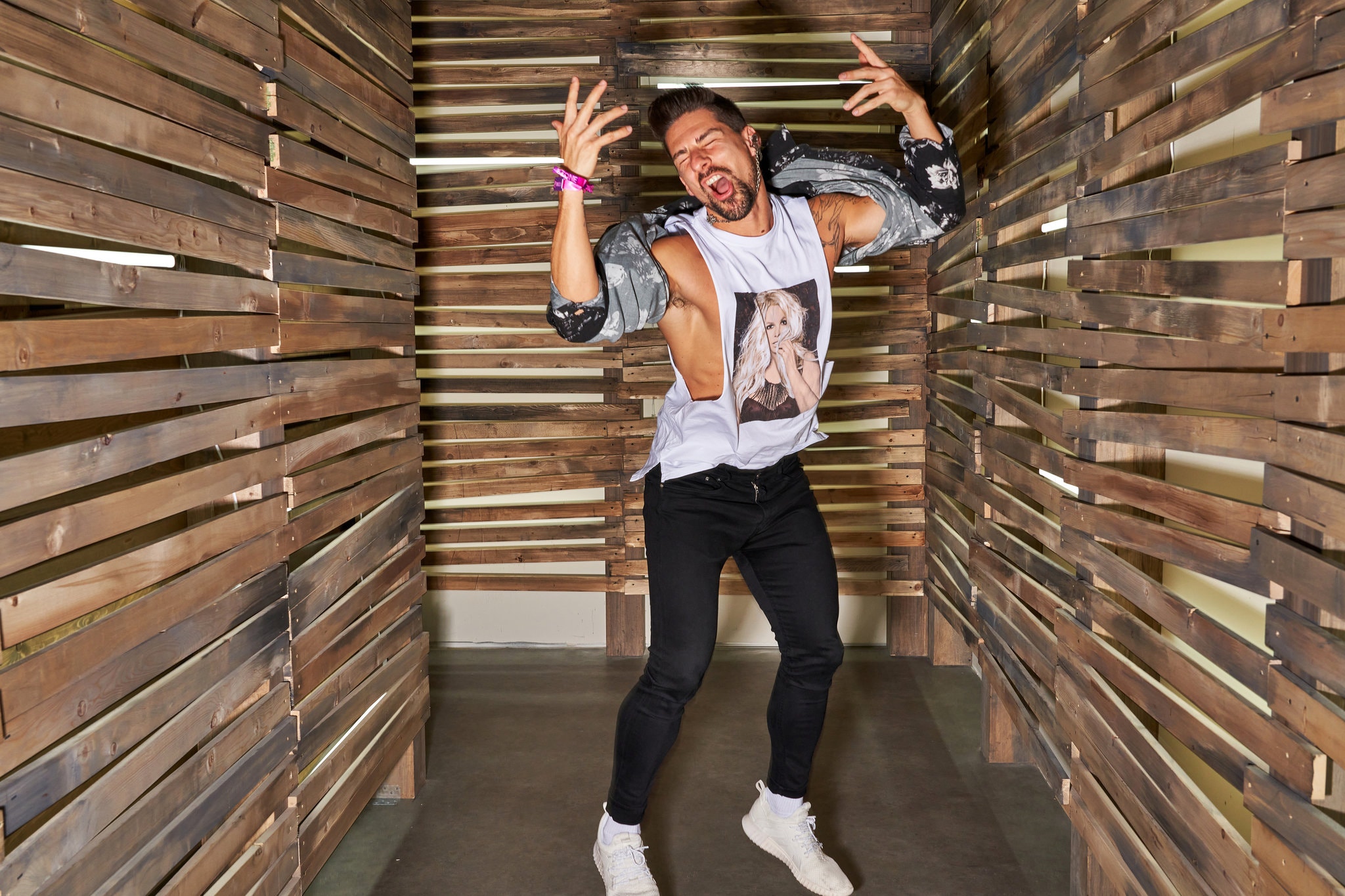 It’s Dustin Martinez against the music.Credit...Michelle Groskopf for The New York Times

LOS ANGELES — Welcome to a Britney Spears fantasy land: the Britney of the past, the Britney we want her to be.

Britney Spears the Zone, a 30,000-square-foot fan-generated experiential pop-up dedicated to the career of the Princess of Pop, has been erected at a time when there’s no sign of her return to Vegas — or the stage anywhere — and she is still under personal and financial conservatorship.

It includes 10 rooms that each recreate an iconic music video set, album concept or live performance, beginning with a “…Baby One More Time”-inspired high school classroom.

There, a video featuring Ms. Spears’s longtime friend and erstwhile assistant, Felicia Culotta, plays from a 150-inch customized LED screen. A special film was applied to the outside to make it look like a chalkboard.

“Today is all about unleashing your inner Britney,” Ms. Culotta, as the school principal once more, reminds each group. Then guests are released into Britney High, the classroom doors flung open by a Zone staff member.

“I’ve literally cried every time I’ve walked into a room,” said Rachel Posteraro, 21, from Long Beach, Calif., who has been a Britney superfan since the age of 9.

Will Tran, 31, a dance and gymnastics instructor from Orange County, who made himself at home on the various sets, said: “I wore my stretchy jeans for a reason.” He and a friend wore matching “Britney for President” T-shirts. “I’m doing it for the ’Gram,” said Mr. Tran, while doing an impressive split.

In a jungle-y space, the music video for “I’m a Slave 4 U” was projected onto curtains made of fog, and guests were encouraged to pose with a plush stand-in for Banana, the albino Burmese python who appeared with Ms. Spears during the 2001 MTV Video Music Awards.

“Pop-up museums are my favorite,” said Shannon Stone, 28, an accountant for film productions. Ms. Stone, who was dressed as a schoolgirl Britney, filmed a video for her Instagram story, as the motion-tracking eyes of a 35-foot hand-carved python watched the scene from overhead.

“There’s always music playing and each room is a new backdrop, which is what every girl on Instagram dreams about,” she said. “It’s all you could want.” Ms. Stone estimated that she had taken about 500 hundred photos already that day. (It was 3:20 p.m.)

In the Circus room, guests waited in line to jump into a pit containing 80,000 white plastic balls.

“Coronavirus on three,” shouted a woman who was filming a friend’s boomerang, in lieu of “Say ‘cheese.’” A Zone attendant dove into the pit to fish out a toddler submerged over his head. A man dug through the balls, as if looking for something.

“I lost my friend!” he yelled. Another adult surfaced from the ball pit as if on cue.

How the Britney Spears pop-up came together
For decades, this site was a thriving beacon of American excess, smack in the heart of Hollywood. An emporium of everything from Zirconia jewelry sets to Ziploc sandwich bags.

Then, in November 2018, the Kmart across from the Grove closed its doors for good. For a year, the space sat vacant and forgotten. A husk of its former self, waiting for an enterprising producer to come up with its second act. A classic Hollywood cliché.

“When we got the space in November, it was completely empty, with a couple abandoned registers up front and no walls,” said Jeff Delson, 36, the chief executive of the music merchandising company Black Sky Creative and the co-creator, along with Shannon Ramirez and Lee Rosen, of Britney Spears the Zone. All three said they are Britney superfans.

The singer agreed to license her image and has engaged with the Zone on social media. Mr. Delson has worked with her before; during her Las Vegas residency, he handled much of the merchandising.

Important information about the Britney pop-up
The pop-up is scheduled to run through April 26. Tickets range from $59.50 to $64.50 at peak hours, and are sold in 15-minute blocks, so that no more than 12 to 15 people are in one activation at a time. This cuts down on crowds and allows for selfies to be taken in peace. But it also means that the Zone has a quiet, lonely feeling at times.

At check-in, visitors are given RFID wristbands and instructed to download the Zone’s app. In each room, there is a panel that, when a wristband is swiped against it, routes your photo to your phone within minutes.

In a dimly lit room inspired by the music video for “Stronger,” there were three metal chairs attached to the floor, upon which visitors, when there were any, were encouraged by a pink-shirted room attendant to gyrate. When the room was empty, the mirrored walls and empty chairs were an eerie sight juxtaposed with the looping music (“My loneliness ain’t killing me no more”).

If the ticket price is prohibitive, the Zone lobby is welcome to all. Here you can shop for merchandise from five capsule collections, including a rainbow Pride collection, an army collection, athleisure, a Zone collection and throwback merchandise.

There are also four authentic Britney costumes on display, on loan from the singer, including her blue stewardess costume from the “Toxic” video and the poofy black party dress that 10-year-old Brit wore on “Star Search” in 1992, just seven years before appearing in her underwear on the cover of Rolling Stone.

“$70 is a little bit much for someone who hasn’t been relevant recently,” said Rachel Turner, 17, a TikTok star of moderate fame, who graduated from high school early to focus on her social media career.

She was eating lunch across the street with her friends when she noticed the big pink Britney mural she had seen on social media. Unwilling to pay for a ticket, she didn’t enter the Zone, and was disappointed to hear that Ms. Spears herself had not yet visited, either.

“I just want to take pics in the ball pit,” she said. “It’s so aesthetic.”